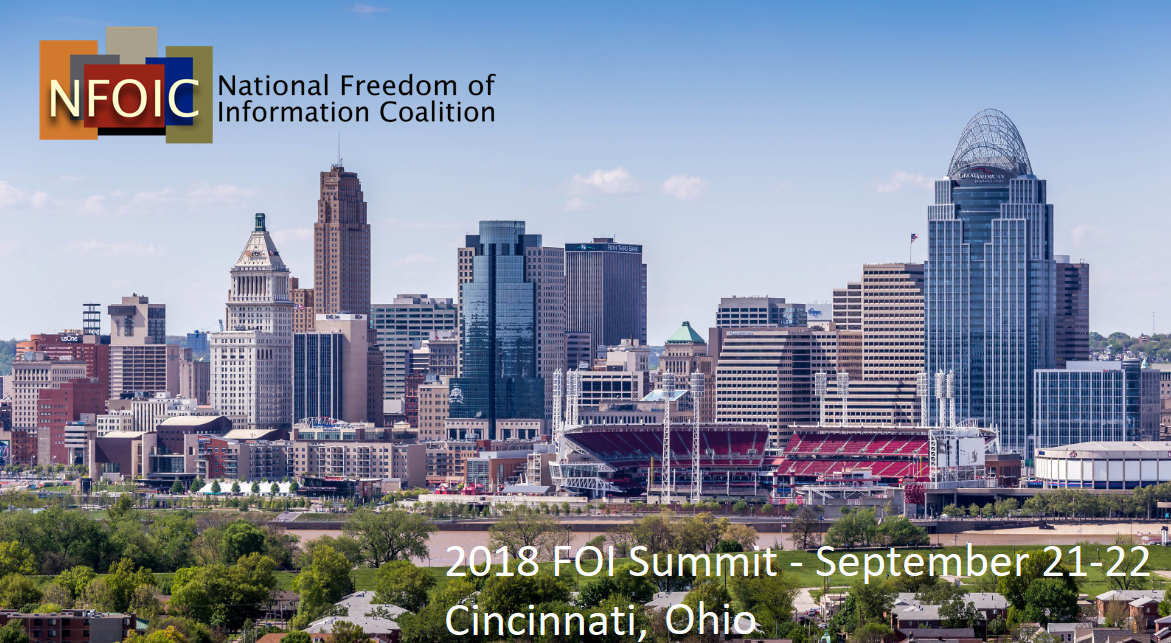 The National Freedom of Information Coalition (NFOIC) and the Ohio Coalition of Open Government (OCOG) convened the 2018 FOI Summit in Cincinnati, Ohio, on September 21st and 22nd at the Westin Cincinnati.

Join your fellow coalition directors and open government advocates for breakfast featuring a series of concurrent roundtable discussions important to state coalitions with topics ranging from sustainability to impact. Conversations will include fundraising, marketing, advocacy/lobbying and sustainability.

Discuss the findings from a survey of state coalitions on the year’s victories, setbacks and challenges in FOI and open government.  Participate in a discussion on Public Records Fees –the case to charge or not to charge. Inconsistencies exist in how fees are established and administered across jurisdictions, and even within the same administration. Do policies match reality? How are fees decided? What evidence exists, and should different fees apply based on the requester? Can realistic reforms be developed and enforced to justify whether public agencies should charge fees for this important public service?

Reforms to FOI administration can begin with public agencies adopting consistent policies to manage information and data. Collecting, organizing and reporting public information for release before it is requested can save time and money. This session explores the value of progressive policies governing proactive disclosure and open data.

Sponsors: The Cincinnati Enquirer, part of the USA TODAY Network and Graydon Law

Conversations among elected government officials about public business that do not occur in a public forum typically violate state open meeting laws. Due to growing use of technology devices and apps, violations are on the rise.  Join a discussion about state open meeting laws and help identify elements for model legislation and mechanisms to enforce those already on the books to ensure public meetings remain open to the public.

Twenty-three states still lack a formal public records appeal process, leaving a denied records petitioner in those states with little option but to sue. Litigation comes at a cost in time and resources to both the petitioner and the government entity being sued. Some states are addressing the growing challenge surrounding an effective appeals process. This session highlights three regional states that administer distinct models for appealing denied public record requests.

Public records concerning law enforcement tend to be the most difficult to access. From use-of-force to predictive policing, and from sentencing data to body cam footage, agencies in the justice system are consistent at one thing: denying access. This session addresses the challenges to obtain public records including research models and data analysis techniques used by these agencies, along with the validity and legality of their policies and practices.