COLUMBIA, Mo. (April 6, 2012) —Toby Nixon, president of Washington Coalition for Open Government (WCOG) and a city council member in Kirkland, Washington, has been selected for induction into Heroes of the 50 States: The State Open Government Hall of Fame for 2012.

The National Freedom of Information Coalition (NFOIC) and the Society of Professional Journalists (SPJ) announced Nixon’s selection jointly today. The State Open Government Hall of Fame, begun in 2003, was developed by national leaders of SPJ and NFOIC to recognize the contributions made by open government advocates in individual states.

This year’s formal induction ceremony will take place on Saturday, May 12, at a luncheon during the 2012 FOI Summit at the Madison Concourse Hotel and Governor's Club in Madison, Wisconsin, hosted by NFOIC and the Wisconsin Freedom of Information Council.

Nixon, who also served in the Washington state House of Representatives from 2002 to 2006, is only the second elected official to be selected for the State Open Government Hall of Fame. 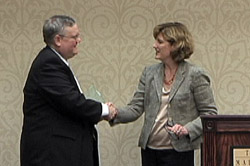 Toby Nixon accepts congratulations from NFOIC President Lucy Dalglish after being inducted into the State Open Government Hall of Fame at the 2012 FOI Summit in Madison, WI, on Saturday, May 12.

We will soon be providing video of this presentation, the rest of Saturday's luncheon, and much more from Saturday's panels and discussions.

During his time as a Washington legislator, he sponsored 13 bills supporting more open government and also served as a ranking member of the House Committee on State Government Operations and Accountability, which under his leadership passed 17 election reform bills.

“Toby is the twelfth overall inductee since the ‘Heroes’ Hall of Fame was begun, but only the second elected official chosen,” said Kenneth F. Bunting, executive director of NFOIC. “Government works better, and people in Washington state are more informed, because of Toby's work as a legislator, as a municipal official and as an extremely hard-working and dedicated officer of WCOG.”

Nixon was nominated by the WCOG, the state member organization of NFOIC for which he has served as president since 2007. During his time at WCOG, he has built the organization into one of the most effective state coalitions in the country. The organization played an instrumental role in the 2010 U.S. Supreme Court ruling in Doe v. Reed, which affirmed a lower court ruling that disclosure of the identity of petition signers does not violate the First Amendment. WCOG has also filed nine amicus briefs to support other open government cases in Washington Appellate Courts, tracked over 75 bills in the Washington State Legislature, and significantly expanded public outreach by hosting an annual Washington State Open Government Conference.

Fighting numerous appeals and court cases to ensure the release of the public records, Nixon’s hard work in the Doe v. Reed case paid off when in November, 2011, the records were finally released to the public.

Induction into The State Open Government Hall of Fame signifies the “long and steady effort to preserve and protect the free flow of information about state and local government that is vital to the public in a democracy.”

A committee that includes a representative of SPJ, a representative of NFOIC, and at least one additional at-large member evaluates all nominations. Each year, judging commences after Sunshine Week in mid-March. To ensure the integrity of the process, judges only become known to each other in the latter stages of the judging process.

The judges who reviewed nominees for the Hall of Fame award this year were: Charles N. Davis, an associate professor at the Missouri School of Journalism and former executive director of NFOIC; Mike Farrell, an associate professor of journalism at the University of Kentucky and the director of the Scripps Howard First Amendment Center; and Tony Pederson, professor and Belo Distinguished Chair in Journalism at Southern Methodist University in Dallas.

Farrell said, “Anyone who aspires to be an open government hero should meet Toby Nixon and learn his story. He has lived government transparency as a public official and invested countless hours of his life as a private citizen advocating, strategizing and involving others in efforts to keep government accountable to voters.”

Davis adds, “Toby Nixon is the embodiment of citizen involvement in FOI. He has, despite an incredibly busy schedule, stepped up time and time again and furthered the cause of government transparency in Washington State. The coalition there is a testament to his prowess as an organizer, and government in the state is more open thanks in no small part to his volunteerism.”

Nixon has been praised for his coalition building as well as his successes as an open government advocate. Tony Pederson remarks, “Toby Nixon is a treasure for the state of Washington for his extraordinary focus on freedom of information. His efforts over an extended period of time have involved working at every level of government and with numerous constituencies to build consensus on the importance of transparency and open government.”

In recognition of his commitment to open government and public information issues, Nixon also won the 2006 Freedom’s Light Award from the Washington Newspaper Publishers Association, and he served on the Washington Open Government Task Force, an organization created by the Washington Attorney General to address concerns about violations of open government laws. In addition to his work as a city council member and an open government advocate, Nixon is a 35-year computer industry veteran, working on the Windows group at Microsoft.

Nominations for this award are made to honor individuals who have shown a substantial and sustained commitment to open government and freedom of information issues at the state and local level.

The most recent inductees to the State Open Government Hall of Fame include: John R. Finnegan Sr., chairman emeritus of the Minnesota News Council and president of the Minnesota Joint Media Committee; Robert J. Freeman, executive director of the New York Committee on Open Government; and Mitchell W. Pearlman, executive director emeritus of the Connecticut Freedom of Information Commission and a director of NFOIC.