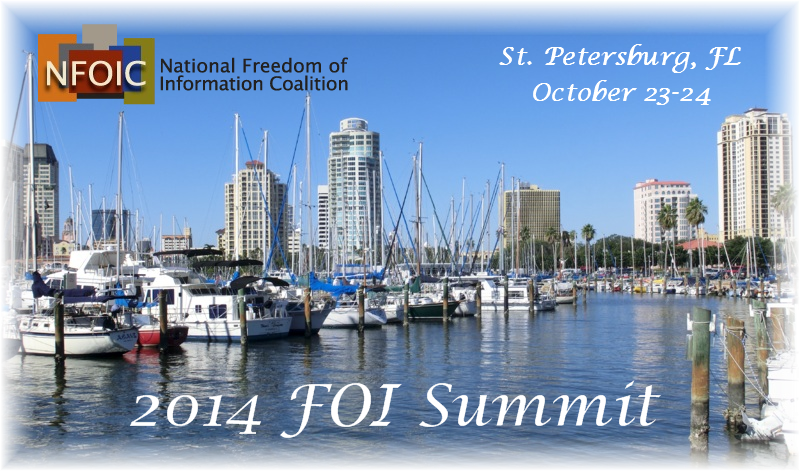 Farhood resides in Tallahassee (FL) and can often be found on the campus of Florida State University where he teaches the state’s only mobile app development course. He holds two graduate degrees in communication and technology from FSU, another graduate degree in computer engineering from the University of Central Florida, and is a doctoral candidate in modeling and simulation engineering at the UCF. Bellwether is a web and mobile software development company that provides both independent clerks and lettings agents with inventory software. Farhood is a recipient of the Florida Association of College’s Outstanding Leadership Award.

Thomas Blanton is director at the National Security Archive at George Washington University. Described as “the world’s largest nongovernmental library of declassified documents,” the National Security Archive received U.S. journalism’s George Polk Award in April 2000 for “piercing self-serving veils of government secrecy, guiding journalists in their search for the truth, and informing us all.” Blanton served as the Archive’s first Director of Planning & Research beginning in 1986, became Deputy Director in 1989, and Executive Director in 1992. He filed his first Freedom of Information Act request in 1976 as a weekly newspaper reporter in Minnesota; and among many hundreds subsequently, he filed the FOIA request and subsequent lawsuit (with Public Citizen Litigation Group) that forced the release of Oliver North’s Iran-contra diaries in 1990.

His books include White House E-Mail: The Top Secret Computer Messages the Reagan-Bush White House Tried to Destroy (1995). He co-authored The Chronology (1987) on the Iran-contra affair; and Masterpieces of History: The Peaceful End of the Cold War in Europe. Blanton also served as a contributing author to three editions of the ACLU’s authoritative guide, Litigation Under the Federal Open Government Laws. His articles have appeared nationally and globally. A graduate of Harvard University, Blanton was an editor of the independent university daily newspaper The Harvard Crimson. He has received the American Library Association James Madison Award Citation for “defending the public’s right to know,” and is a founding editorial board member of freedominfo.org, the virtual network of international freedom of information advocates.

Susan Boe has been executive director of the New Mexico Foundation for Open Government since January 2014. Founded in 1989, NMFOG provides assistance to the public, the public sector and private sector through a variety of educational, judicial and legislative programs and services. Sue is a retired attorney, former journalism law/ethics professor and one-time journalist at newspapers in Santa Antonio and Corpus Christi, Texas. She practiced law in Minnesota, New Mexico and Iowa, where she was on the advisory council to the Iowa Freedom of Information Council.

Sandra F. Chance is the McClatchy Professor in Freedom of  Information at UF’s College of Journalism and  Communications. She is also the Executive Director of the  Brechner Center for Freedom of Information, and educates  and  promotes freedom of information laws and policies by  providing training sessions, answering queries and  conducting  scholarly research on First Amendment and  freedom of  information issues. She’s a member of the U.S.  Supreme  Court  Bar, the Florida Bar and admitted to practice before the federal courts in Florida.

Mark R. Caramanica is an attorney at Thomas & LoCicero, PL in Tampa. He focuses on media law, intellectual property law, and civil litigation. Most recently, he was an attorney at The Reporters Committee for Freedom of the Press. In that role, he specialized in freedom of information, access, and intellectual property issues. He received his law degree from the University of Florida and is licensed to practice in Florida and New York.

David Cuillier, Ph.D. directs the University of Arizona School of Journalism. He chairs the Freedom of Information Committee and is the immediate past president for the Society of Professional Journalists. David researches and teaches access to government information, and is co-author with Charles Davis of “The Art of Access: Strategies for Acquiring Public Records,” and “Transparency 2.0: Digital Data and Privacy in a Wired World.” Before entering academia, he was a newspaper reporter and editor in the Pacific Northwest, and he currently lives in Tucson.

From 2001-2009, Rosalind covered a number of suburbs of the nation’s capital in Virginia and Maryland. In 2009, she covered the Virginia gubernatorial campaign followed by a year-and-a-half in Richmond as a state politics reporter. In 2011, she became a Congressional correspondent and in that role assisted in coverage of the 2012 Presidential election. Following a tip from an old source, she embarked on what became a month’s long investigation of gifts and loans accepted by Virginia Governor Bob McDonnell and his family. The governor and his wife were both convicted of federal corruption charges in August. The coverage earned a George Polk award for political reporting in 2013.

Coulter Jones is an investigative reporter specializing in data analysis. In that role, he has worked for The Wall Street Journal, New York Public Radio, The Center for Investigative Reporting and newspapers in Pennsylvania. He is the project manager for FOIAMachine, an online platform to streamline the creation, filing, and tracking public records requests.

John has been immersed in New York state and city policy and fiscal issues, FOI law, and government transparency issues since the 1990’s. At Reinvent Albany, he helped win the creation of the state’s open data program, Open NY. He contributed to major improvements at the Comptroller’s Open Book New York website and the AG’s New York Open Government website. John led two campaigns for a transit “lock-box” to end the diversion of transit dedicated funds and for the NYC Open Data Law. A former executive director of Transportation Alternatives in NYC, John’s writing has appeared in many New York dailies, technical and scholarly journals.

A graduate of the Columbia University Graduate School of Journalism, and a graduate of the University of St. Catherine in St. Paul, Mary Ellen has won awards for her enterprise coverage on numerous issues, including the state’s utility industries, Florida’s growth management and environmental laws, nursing home reforms and the 2000 presidential recount. She has covered five governors including the state’s first attempt at health care reform, the landmark tobacco lawsuit, insurance reforms, statewide economic crisis, the state budget, the expansion of gambling, and political redistricting. She was the former Tallahassee bureau chief for Florida Trend magazine and bureau chief for the Palm Beach Post.

Attorney John R. Marks IV currently serves as the Master’s in Information Technology Chair and Instructor at Florida State University’s College of Information. He teaches information policy, legal research, web programming, communications, and project management. He is also C.O.O. of the Jane and John Marks Foundation, a charitable organization dedicated to enhancing civic and minority involvement with technology, in addition to practicing law at the Marks & Marks law firm. His career has focused on the social implications of internet broadband and new media technologies.

Before taking her current position at FAF in 1995, Petersen was staff attorney for the Joint Committee on Information Technology Resources of the Florida Legislature, where she worked exclusively on public records legislation and issues. A passionate advocate of the public’s right to oversee its government, Petersen is the author of numerous reports and articles on open government issues. She currently sits on the board of the Florida Center for Investigative Reporting and NFOIC, having served as its president and treasurer. Petersen served as chair of Florida’s Commission on Open Government Reform. Petersen is a graduate of the University of Missouri-Columbia and Florida State University College of Law.

Jeffrey A. Roberts worked in journalism and public policy before coming to the Colorado Freedom of Information Coalition in July 2013. Roberts was at The Denver Post from 1984-2007 as a reporter, assistant city editor and data journalism specialist on The Post’s projects team. He later spent four years at the University of Denver’s Center for Colorado’s Economic Future. Early in his career, he was a reporter at the News-Press in Fort Myers, Fla. Roberts earned his bachelor’s and master’s degrees from Northwestern University.

Kelley Shannon became executive director of the FOIFT in 2013. Previously, she spent nearly three decades as a journalist. Kelley was a correspondent with The Associated Press, first in San Antonio and later as bureau leader in Austin. She also worked as a reporter for The Dallas Morning News, the Savannah (Ga.) News-Press and the Palestine Herald-Press. She has done extensive freelance reporting, including in-depth open government projects for the non-profit Center for Public Integrity, and has been an adjunct journalism instructor at the University of Texas in Austin.

Emily oversees the Sunlight Foundation’s state and local policy work. She holds a Ph.D. in political science from the University of California, Berkeley and a B.A. from Brown University. She most recently served as an assistant professor of political science at Thomas College in Waterville, Maine. She has worked for a range of civil and human rights organizations including Human Rights Watch, the ACLU, the American Friends Service Committee and the Organization for Security and Cooperation in Europe. Her writing and speaking focuses on issues of voting policy, municipal tax policy, and campaign finance, and she is a regular and enthusiastic user of open government data.

Shane specializes in investigative work and data visualization. Before joining The Huffington Post in 2013 he worked with The Center for Investigative Reporting and The Bay Citizen mapping Bay Area bike accidents and reporting on the dramatic delays in the Veteran Administration’s processing of veterans’ injury claims. Shane is a proponent of open records and data and in 2013 received the James Madison Freedom of Information Award for his reporting on judicial conflicts of interest. Shane is also a developer of the FOIA Machine.

An attorney based in Westborough, Mass, Justin’s practice focuses on media, employment law and small business concerns. He is a former contributor to the Digital Media Law Project at Harvard Law School’s Berkman Center for Internet and Society. In September, Justin became the executive director of NEFAC, a broad-based regional organization whose members include lawyers, journalists, historians, librarians and academicians, private citizens and organizations whose core beliefs include the principles of the First Amendment. The coalition aspires to advance and protect the amendment’s five freedoms, and the principle of the public’s right to know, in Connecticut, Maine, Massachusetts, New Hampshire, Rhode Island and Vermont.

Susman’s work includes counseling, litigation, and lobbying on access to government information and privacy. In addition to a general legislative and regulatory practice, he has litigated FOIA cases against the CIA, State Department, Defense Department and Justice Department; testified on FOIA reform before the U.S. Congress; advised clients on information issues; and authored a number of works on information and privacy. Tom is Founding President of the D.C. Open Government Coalition and serves on the Board of the National Freedom of Information Center and on the Steering Committee of OpenTheGovernment.org.

John Paff is the 2014 State Government Hall of Fame inductee. John has been called “New Jersey’s busiest open government activist” by veteran reporter Colleen O’Dea, who featured him in a February 2014 profile piece in NJ Spotlight. John works to ensure that public agencies are following the OPRA and OPMA laws and writes about noteworthy issues in his blog, NJ Open Government Notes. Since 2003, he has served as the Chairman of the New Jersey Libertarian Party’s Open Government Advocacy Project, and has served as a member of the Middlebush Volunteer Fire Department since 1992 and has been the Department’s president since 2008.