Thank you to all those who attended and participated in the annual summit. We are especially thankful to our Platinum Sponsor, Bloomberg LP, and Contributing Sponsors the InAsMuch Foundation, Charles Koch Institute and the Brechner Center for FOI at the UF College of Journalism and Communications. 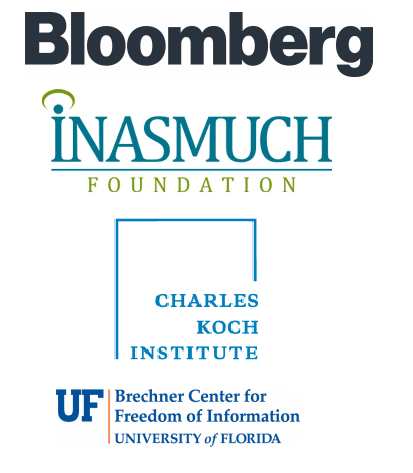 Learn more about the sessions and view the presentations below.

Public funds to private companies to spur economic development is not new. Every year, state and local governments award an estimated $70 billion in subsidies to attract and retain businesses and jobs. Details of amounts, in-kind incentives and tax credits are typically withheld from the public claiming disclosing the information jeopardizes current and future deals. This session on public oversight and accountability concerning the use of public funds will ask: Is government confidentiality necessary to secure economic development and jobs in communities? And what can be done to help residents better understand the costs and benefits from those funds through greater transparency and access to information about their use? Moderator: Dalia Thornton, Director, Research and Collective Bargaining Services, American Federation of State County & Municipal Employees

Four states provide lessons learned for enacting recent police reform measures expected to lead to greater transparency and accountability. Hear from individuals from three of the states who contributed to passing those measures and strategy recommendations that can be applied to other jurisdictions. Moderator: Diego Ibarguen, Counsel, Office of General Counsel, Hearst Corporation

At a time of national health crisis, the public urgently needs timely and accurate information about health-and-safety issues. Public institutions, however, create unnecessary obstacles to health information through the misuse or misrepresentation of open government laws or exemptions, such as HIPAA. While there is a balance to strike between transparency and privacy, the overriding interest is to keep residents informed. Hear from a panel of experts about what information and data sets are most important in a health crisis and how they can be more easily obtained from those who have it. Moderator: Justin Silverman, Executive Director, New England First Amendment Coalition

General Session #4: The future of public records (Video – Session begins at the 1:00 mark)

From creation to dissemination to archiving, digital records now dominate government documents and data. Throughout their lifecycle, however, many records are lost or become impossible to retrieve. We are in an era of disappearing messaging apps, self-destructing emails, temporary Tweets and an emerging virtual government workforce. It’s become a major challenge for public agencies to abide by state open government laws pertaining to collecting, managing and disseminating public information in today’s digital society. Hear from a panel of experts and practitioners as they discuss the role of technology and administrative processes needed to ensure digital documents are secured and publicly available from cradle to grave and beyond. Moderator: Mark Walker, FOIA Coordinator at the New York Times

The health pandemic forced state and local governments to move their public meetings online to deliberate virtually. This challenge led to confusion and disruption in many jurisdictions due to shortcomings from the technology solutions and legal requirements. Violations of public meeting laws (intentional and unintentional) resulted in many residents and journalists excluded from public proceedings. Several public bodies claimed a successful transition to virtual meetings, and there is positive data showing increased public participation. This session explores the continued use of online meetings even when governments return to in-person deliberations, and their potential for increased communication, participation, and trust. Moderator: Valerie Lemmie, Director of Exploratory Research at the Kettering Foundation

Transparency experts believe open government law violations could be greatly reduced if public institutions would just enforce the laws that are already on the books. Charging a public official or agency with a violation is rare. Punishments are rarer, and when they occur they are usually a slap on the wrist. This session is a discussion about what is required for state and local governments to create and practice a culture of compliance and the benefits that can be realized. Moderator: Stefaan Verhulst, Co-Founder and Chief of Research and Development,The GovLab at New York University

Nine winning research papers have been accepted to the second National Freedom of Information Coalition FOI research competition. The top three authors discuss their findings in the general session that was followed by a nine virtual poster sessions with all the authors discussing their papers and answering questions.

The top three papers to be presented in a panel session at the National FOI Summit are: