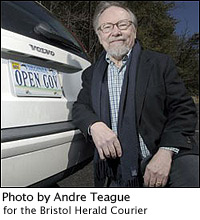 SEATTLE – Maybe it’s the Volvo station wagon with "OPEN GOV" vanity plates. Then again, it might be his bow ties, or his trademark tweed cap. Any way you identify him, Forrest Malcolm "Frosty" Landon is a force to be reckoned with, and we can all be thankful that freedom of information issues caught his eye.

Frosty Landon, a longtime champion of open government and driving force behind the creation of the Virginia Coalition for Open Government, has been selected by the National Freedom of Information Coalition and the Society of Professional Journalists for their joint "Heroes of the 50 States: The Open Government Hall of Fame" award.

For more than 50 years, Landon has worked to combat government secrecy, first as a journalist, and then as an FOI advocate. Frosty is now preparing to retire as executive director of the Virginia Coalition for Open Government – a nonprofit organization he helped establish in 1996 after retiring from daily journalism.

As VCOG’s only full-time employee, Landon advises journalists and citizens about the nuances of open meeting and open records law, while working with lawmakers to make improvements.

"He was instrumental, during the study, of getting the FOIA Council founded," Everett said. "He was the one who persuaded everybody it was necessary."

Landon also has been deeply influential on open government issues nationally, serving two terms as president of the National Freedom of Information Coalition. He remains active in that organization as a board member.

"Organizing, running, and securing a group in one’s home state is daunting by itself, but Frosty became the Johnny Appleseed for open government advocacy," said Frank Gibson, executive director of the Tennessee Coalition for Open Government.

The upstate New York native moved to Roanoke just after graduating from the University of Missouri School of Journalism. He still calls the city home. Married to Barbara Landon for more than 50 years, Frosty’s children, Tracy and Jeff, and his three grandchildren, Maggie, Emma and Mason, try but fail to keep him in line.

"Heroes of the 50 States: The State Open Government Hall of Fame" is a joint venture by SPJ and the National Freedom of Information Coalition. It was developed by leaders in both organizations as a way to recognize long-term contributions of individuals to open government in their respective states.

Specifically, induction into the Hall recognizes "long and steady effort to preserve and protect the free flow of information about state and local government that is vital to the public in a democracy."