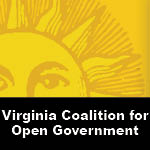 At its Sept. 12 meeting, the FOIA Council took two encouraging steps toward open government in Virginia.

In one instance, the council unanimously recommended that the State Corporation Commission, Del. Scot Surovell (D-Mount Vernon) and interested stakeholders work together to find mutually agreeable language that would subject at least some of the records or functions of the commission to FOIA. A council subcommittee had previously refused to make such a recommendation, but the full council backtracked. VCOG spoke in favor of the change, noting that similar agenices in other states are subject to their state open records law to some degree. Read a detailed recap of the council deliberations in Virginia Lawyers Weekly.

In the other instance, the council refused to take up the invitation of Hanover County Attorney Sterling Rives and Del. Chris Peace (R-Mechanicsville) to further study Hanover’s suggestion to change FOIA to allow more than two members of a board to talk public business without it being an open meeting under FOIA. Rives told the council that sometimes officials don’t like to talk about controversial issues in public. "The setting is not conducive to throwing out different ideas and debating each other on those ideas. As we might do in a private setting, you come up with all these ideas and then five minutes later you say 'Oh no, that was stupid, let's not do that,'" he said. To which, Sen. Richard Stuart (R-Stafford), chair of the council quipped, "I do it every day when we're in session." Despite the council's disinterest in the idea, Hanover Board Chair W. Canova Peterson IV told The Herald Progress he will continue pushing for change, calling the decision the "first discussion" of the issue, even though the issue was first raised at least as far back as September 2012.

On the last day of September, Lt. Governor Bill Bolling and his Virginia Mainstream Project released a series of proposals designed to "improve the structure and operation of Virginia's state government," according to a news release on Bolling's website. Among the proposals is one to require the FOIA Council to review all current FOIA exemptions "and make recommendations on which exemptions should be removed or amended in order to ensure that Virginia has the fairest open government standards."

Bolling also endorsed a two-term governorship, a full-time lieutenant governor, the establishment of a government performance review commission, merit-based judicial selection, a change in the budget cycle and bipartisan redistricting.

In proposing the FOIA review, Bolling noted that in the 14 years since he reworked FOIA (in conjunction with the late Del. Chip Woodrum), "the General Assembly has added numerous exemptions . . . , all of which have made it more difficult for citizens to get access to information they should be entitled to."

We have a spectacular group of speakers and panelists lining up for VCOG's annual conference, which is slated for Dec. 6, at the Williamsburg Community Building.

Our keynote speaker is former U.S. Chief Technology Officer and Virginia Secretary of Technology Aneesh Chopra, talking about government technology and the promise of open data.

Panels will focus on Virginia's gifts and disclosure laws, ethics, transparency and "The Virginia Way."

The Virginia Coalition for Open Government is a member of NFOIC. –eds